12th March: No meeting will be held – our venue is unavailable.
26th March: Join us for an informal session – open mic, writer’s news,”Author Report”

2nd April instead of 9th due to Campus scheduling
SPECIAL WORKSHOP – The Editor’s Nightmare – an interactive exercise where you work in a small team to decide which pieces will be published in an exciting new journal. No experience necessary – just an open mind to the writings of others.
We will follow the workshop with an Open Mic. Feel free to bring a small piece of your original work, poetry, prose – or an extract of a longer piece. You have around three minutes max!  Or you can sit back and listen!

23rd April – two topics – you can combine them if you wish. Sonnets and how we write them today, plus the themes we think of on Anzac Day. Carol Amos has a prize for best original sonnet – but you can read any short piece you like in the open mic! 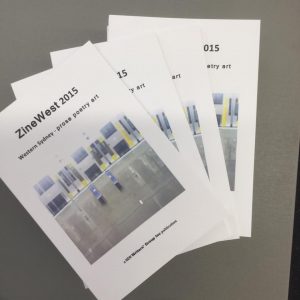 ZineWest 2016 is now open for writing entries! Due date 14th May. ZineWest is a great home for your brilliant shorter works. Genre is open. ZW is for writers not yet trade published except in multi-author journals. We publish 30-34 writers and ten visual artists, plus ten more writers can perform at ZW WORD which follows the print zine launch. WritingEntryFormZW16 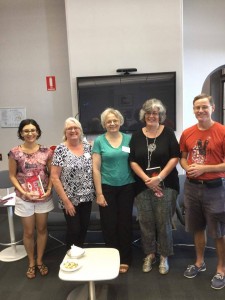 At our first event upstairs in the Collaborative Space at FutureCampus, Parramatta, first time gatherer Malinda Rose (on left) won a prize in our Valentine’s Open Mic. On her right is NWG President, Carol Amos, Sue Crawford (one of the judges) the other winner, J. Anne DeStaic and Peter Masonwells our treasurer and on this occasion also our second judge. The scores were close for all our poets, well read, thoughtful pieces, a mix of traditional and contemporary. We also held a workshop on a fascinating poem by Sue Chamoun, who also took this picture!  For more pics see Gallery

We start our new year with a lot of LOVE at our new venue, FutureCampus, Parramatta. President Carol Amos will greet our regulars, new friends and campus students before inviting you to perform or just listen at an Open Mic in honour of Valentine’s Day.

You have three minutes max to tell us in prose or poetry about: The Icky, The Precious, The Disastrous, The Frankly Unbelievable or possibly The Real Thing. Check the Rules! NWGVal’sOPENMIC16 If we have time after the Open Mic we’ll hold a Readers’ Feedback Workshop – all welcome to participate.

Please note, no food or drink other than water can be consumed in the Collaborative Space. There are lovely coffee shops nearby.

The next event on 27th February is very exciting. We welcome international best-selling author Kate Forsyth to talk about her writing journey and Story Structure. 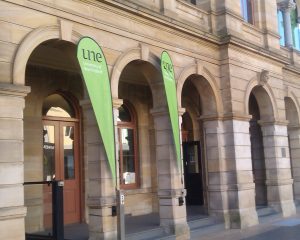 All our regular gatherings will be held at the usual times:
Feb – Nov, 2nd and 4th Saturdays. 3-5 pm with the exception of March 12 when we will hold no gathering. ZineWest 2016 will be 8th October.

Many thanks to campus director Rob Field and his staff for this opportunity to return to Parramatta, our home base for 14 years. 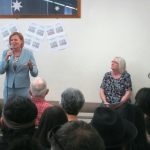 We congratulate all our contributors – as the writing judge Luke Carman said, he was presented with a strong field of thirty-four pieces selected for publication in ZW15 by the guest editors.

Best Image: First: Naomi Oliver for Coat of Arms; Highly Commended: Robert Frost for Goodbye. This is our third year of awarding a prize for artwork. We thank everyone who sent us images. All the entries were relevant to theme – inclusion has a great deal to do with how well an image might turn out in an A5 digitally printed zine. We’re discussing having an open theme next year.

Editor’s Award: Jason Gray for Flashes This award is for an entry that at least two guest editors scored strongly and which did not win a major prize from the judge. Since that describes most of the pieces in the zine it is hard to pick.Flashes was the story which knocked loudest on the editor’s door.

We thank the Writing and Society Research Centre and Giramondo Publishing for their very generous co-sponsorship of these prizes. We also thank our kind anonymous donor of the Best Image Award. We are indebted to Julie Owens our supporter from the very first ZineWest and our excellent judges, Luke Carman (Writing) and Sophia Kouyoumdjian (Art). 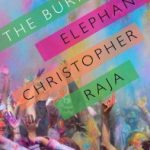 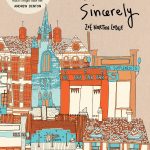 ZINEWEST WORD
Date and Venue as above
Time: 3:00 – 5:00 pm
Two Spoken Word competitions: one for invited ZW15 entrants and one Open Mic. Sign on before 3 pm please!

We had a great time meeting Luke Carman (An Elegant Young Man, Giramondo) on 9th May. The value of his comments went beyond helping the writers whose work he was reviewing. We plan to re-cap insights from this workshop and our previous special guest events. What have we learned from experienced writers? What are we doing about it!

Saturday 23rd May is the last date our gatherings can be held at the soon-to-be-closed Mars Hill Cafe address of 331 Church Street Parramatta. Sad though we are – we’re going to celebrate the memories! Free entry, free cheesecake, revisiting some award-winning pieces and an open mic. We wish the Mars Hill Cafe all the best in their hunt for a new location – an unforgettable team with a proud community history of supporting artists, writers, musicians and the caffeine dependent….

June 13 and 27 gatherings will probably be held in Parramatta CBD but from July onwards our long-term address will change. As soon as we have confirmation we’ll give you the details. Many thanks to Sue Chamoun who scouted out all the venues.

Don’t forget the big due date of midnight, 25th May for your writing entries to ZineWest 2015 – competition for new Western Sydney writers.
(Art entries due 25th June) 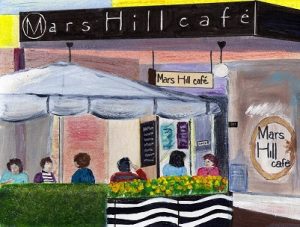 We hope this was not our last gathering at our wonderful home, Mars Hill cafe. Despite our anxiety it was a good day with 20 or more attending. There were nine entrants in our little in-house competition for the best short piece on Anzac – open interpretation. Winners were Brett Campbell and Linda Marsden. Brett wrote about the swiftly changing emotions and escalating danger in a beach attack from a soldier’s pov. Linda wrote about the unbearable waiting at home for news. Danny Draper won a runner’s up award for a sustained denunciation of the powers that turn war and remembrance into profit. All the poems and stories were heartfelt and insightful. Congratulations everyone and thanks to Robyne Young for organising this project. Judges were NWG inc President Carol Amos and ZW editor, Sue Crawford. Book prizes were donated poetry anthologies by Paul O’Loughlin and Mihaela Cristescu.

There is a group photo on our Face Book page taken by Sue Chamoun. The photos below were taken by Mihaela Cristescu. The top image is by Linda Marsden. 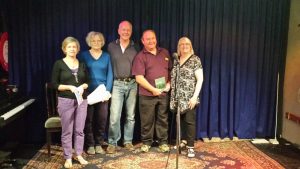 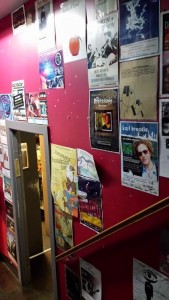 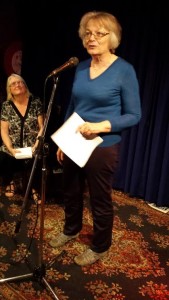 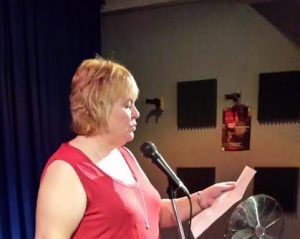 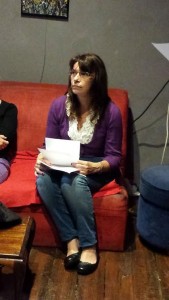 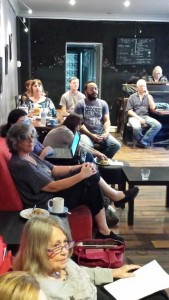 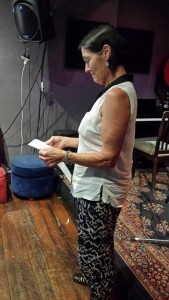 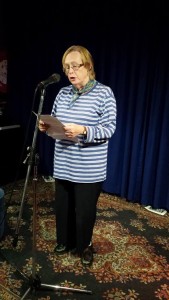