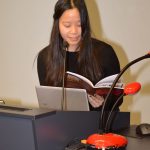 ZW WORD!
Entry $2 (unless you paid for the print zine launch) 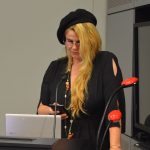 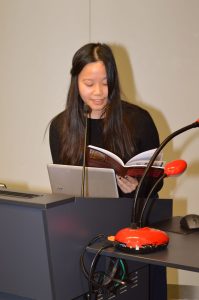 Gallery ZW18
Writing – Judge: Luke Carman
First place and Best Prose: Annie XY Zhang for A Bush, Barely Burning
Second Place: Wafa Kulsoom Khan for The Plan
Third place and Best Poem: Danny Draper for Was That You?
Highly Commended: Michele Freeman for I Guess You Call Us Westies (Comic) and Kate Brown for Share If You Agree (poem) 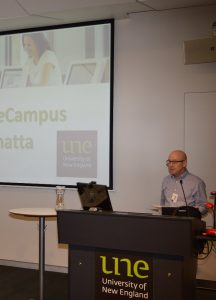 FutureCampus, Rob Field, launched ZineWest 17 on 8th October. Rob shared a glimpse into his history as a member of a very large family. It seems that being surrounded by individuals with diverse gifts and challenges, was like attending a school for empathy and communication. Rob sees openness to the ideas and experience of others as commonsense, however it is a commitment to his own ideas and strengths that has shaped his career. He urged us to have the same confidence to develop our personal talents and insights when creating our writing and art.

Luke Carman, our writing judge, commented on  every writing piece in this year’s ZineWest – a rarity in the world of competitions. We hope to post a copy of his notes for the benefit of those writers who couldn’t attend. Luke (as expected) also officiated at the crazy raffle finale.

Writing awards were co-sponsored by The Writing and Society Research Centre, WSU, including book titles from Giramondo Publishing  (see writing award list below  images). Art and Spoken Word awards were supported by private donors. The Editor’s award (The Big Black Thing) was donated by SWEATSHOP. Our venue was provided free of hire charge by UNE FutureCampus. Sahtein Lebanese Feasts was the keynote of lunch. List of writing winners is below the images.

Best Image: Zena Maghchouch: They, I, Us – Dissociative Identity Disorder “…a raw illustration of its sufferers and their suffering…” 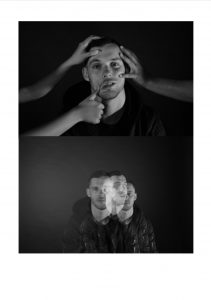 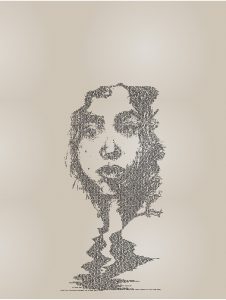 Our art judge who selected all the included images was Sophia Kouyoumdjian, co-ordinator of the Parramatta Artists Studios. 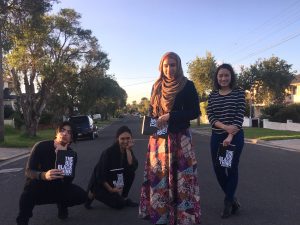 When we have a strong idea for a story, or a promising few lines of poetry, we want to crack open the possibilities. We won’t be satisfied with an easy, clichéd product. More likely we want to be honest. But good writing is a steep hill and being honest makes it steeper. The steady, patient build on inspiration/knowledge can be the answer.

Recently at NEW Writers Group inc we used an example given by director of Sweatshop, Michael Mohammed Ahmad, in his keynote speech at this year’s Sydney Writers’ Festival “Forest for the Trees”. Mohammed began by reading a school student’s piece from Sweatshop’s latest title, The Big Black Thing – Chapter. 1. Mohammed explained that the initial text was very brief. He kept asking the writer to include “more detail” and the result is a fetching story of a house and its people (or of people and their house). When war strikes the house and the people, we the readers know the loss, feel the fear.

The Big Black Thing Chapter. 1 is a vigorous contribution to the growing record of Western Sydney voices. It’s also fun to read. I love this volume because I’m busy at the moment. I can pick it up and take in two or three works, all different, and put it down again knowing that tomorrow I’ll be interested in the next story, the next poem. Contributors come from diverse cultural and language backgrounds. Members of the Western Sydney Writers Group, school students, and Aboriginal and Torres Strait Islanders, have all been wonderfully featured in this first of a series – a great way of advancing literature and community in Western Sydney, and I trust, beyond.

‘Sweatshop was tired of waiting to see more cultural diversity in mainstream Australian literature and media, so we decided to create The Big Black Thing ‘ Michael Mohammed Ahmad.