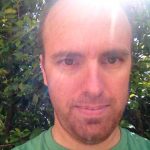 This is Adam’s second year as a guest editor for ZW. Like other guest editors he’s been published in ZineWest: a tanka collection in 2011 and a short story in 2012. Born and raised in Western Sydney, from a young age he enjoyed all forms of art – from music, to drawing, and writing, He is now enjoying the company of other writers, musicians, and artists during New Writers’ Group gatherings. He serves as a Vice President on the NWG committee.

Adam has a degree in Policing Investigations, and is currently studying a Masters of Fraud and Financial Crime. Naturally, Adam enjoys the crime genre and is composing novels in this area of interest.

Adam has been  MC at the last three ZineWest WORD events which are held after the launch of the print zine, and we hope to see him back at the mic on Saturday 11th October, Mars Hill Café for ZineWest WORD 2014. See earlier post for details on ZW WORD and the preceding launch of ZineWest 2014.