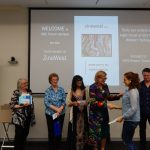 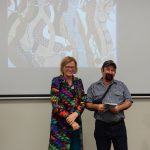 More photos are posted on New Writers Group’s FB Group or ZineWest FB Page and later on this site….

Spoken Word for ZW16 Entrants was won by Kayote and runner-up was Akshay Chougaonkar. Everyone scored well.

Open Mic was won by Robert Dunn, with Peter Cartwright as runner-up. This one was an even closer contest and the judges sought a third opinion from MC Adam Marsden.

Thank you writers and artists and thank you judges, sponsors  and volunteers for making this a memorable tenth edition of ZineWest at the wonderful venue provided by UNE FutureCampus, Parramatta.