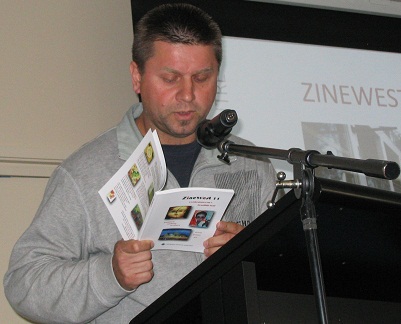 The ZineWest 11 launch was opened by the Hon. Nathan Rees, MP, NSW shadow minister for the Police and Emergency Services and shadow minister for the Arts, and attended by special guest Zelda Baravykas, Expression Sessions. Our judge Fiona Wright, Publications Officer for ZW co-sponsor, the Writing and Society Research Group (UWS) was unexpectedly unable to attend but ZW Editor Sue Crawford conveyed her decisions regarding the first three places and the commendations.

Before listing the awards, it’s worth reflecting upon the general quality and diversity of writing that appears in ZineWest. We can only publish a percentage of works offered, and wish to congratulate all the entrants on their creativity and ideas. This year the Editor gave an encouragement certificate for the first time. Some entrants show both creative maturity and well-honed technical skills; their entries are the most likely to be published and considered for awards. However for those writers still with a little way to go in clarity and polish, it’s important to cheer their bravery. The writers’ attempts to get something quite deep and layered, or something tangled and dense, something beautiful or worrying, onto the paper and out into the world is a fascinating process to witness. Writers and readers alike know how hard it is to put significant stories and thoughts into words, to communicate what matters to us. Well done all.

And a final word about ZW WORD held in the evening: what a wonderful way to finish celebrating ZineWest for 2011. All the writers presenting had something fascinating to say, and they were all completely different. Each of our guest musicians, Desley Taylor, Jim Shipstone and Stewart Peters gave us spades of story in their original songs. Long live variety, humour and heart in Western Sydney! All awards listed below.