The last time she saw him, the world was open for business.

The earth buzzed with airlines tended by doll-like flight attendants. People staggered out of their rental apartments for avocado brunches and bloody marys and sleepy-eyed lazy Sunday morning kisses. The Summer had turned down its smile, but there was still no need for a cardigan to keep off the cool. The streets were streaked with people scuffing their sandals.

Within a few hours, on a fairly average day, the shutters smacked closed on her heart and he disappeared in a rattle of words. She stood staring out the fifth-floor window of her apartment looking at the glitter of Parramatta’s city lights wondering “what happened?”

A few weeks later, she had embraced this change in circumstance. She had packed his things into a green shopping bag.

A reset was in order.

Maybe she would try writing again? She investigated new ways of approaching personal grooming. Considered joining an online weight-loss program/community. Folded all linen in her cupboard. Cleaned out the crisper of all the slinky, soft vegetables.

Masks appeared in shopping centres. Sprays and sanitizer. The snap of a look at the sound of a cough.

Her friend re-prioritised his wedding, inviting everyone to witness the nuptials via zoom.

She scoffed at people hoarding toilet paper, until she discovered the shelves were bare. Recipes for bread and evidence of attempts flooded her usual carb-free social media stream.

She kept inside and cleaned and cooked.

Brushing her hair, she planned her days of keeping away from the world. She watched as it slowed down and stopped. Felt her heartbeat in her chest, and the breeze from her balcony brighten her face. Glad to be alone. Wondering still, “what happened?”

Kept from kisses or kindness, she cultivated a routine: batches of cooking and weekly chores (usually ignored) gave focus to the days. Once acclimatised to her internal world, she couldn’t imagine what led her to the chaos of love with all its inconsistencies and clutter! What cauchemar!

Her hair, now long, framed her face. A face once reserved for kisses, looked out on a new horizon.

Giggled with giddiness at her own vocabulary, chewed on the ends of words like pencils. She wrote quickly and carelessly, without strategy nor structure. She finally pushed “publish” on a post and doubted anyone would read it.

That afternoon, there was a knock at the door (could it be the postman?) and she ran to see, her long, golden hair sweeping the tiles beneath her feet. She swung the door open to find his thick brown coat keeping his blue eyes warm. “What happened?” She asked.

“Until now, I just couldn’t read you.”

‘Melisande’ is inspired by Pelléas and Mélisande, a symbolist play about a forbidden, doomed love. ‘Melisande’ intertwines a recent romantic breakup amid Sydney’s Covid19 restrictions with the story of Rapunzel. Love can be the greatest distraction from a productive writing life, but it can also be the thing that makes a life worthwhile.

.Matilda Hart is an emerging writer, amateur botanist and armchair philosopher, who loves the history and tradition of Australian literature.She spent her formative years in Western Sydney chasing art and pursuing ideas in her grandfather’s beat up Toyota. 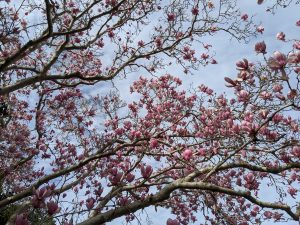