Alastair crept along the path towards Old Government House, clutching his torch.  Parramatta Park was dark and silent around him. He grinned to himself. This was going to be fun.

He climbed the steps to the veranda, pausing as it creaked under his feet. He crossed his fingers and toes for good luck, then thought how superstitious that was, not to mention how cramped his toes were, and uncrossed them again.

Reaching into his shoulder bag, he pulled out an object. He wasn’t sure what to call it. He’d been reading a novel where a character talked about handcuffs and said that they could only be opened with a key, or something exactly like it. Wouldn’t that be another key? Was it supposed to be a philosophical question? As a result, he wasn’t sure what to call the metal object he’d cut out that afternoon.

He wriggled it around in the lock. The tour guide had had difficulty opening the door, so he didn’t expect it to be easy. But as the minutes passed, he became increasingly nervous. There was a creaking sound inside the house. He froze. Nothing happened. He must’ve imagined it. However, the door wouldn’t budge. He stepped back and ran at it, hitting it with his shoulder. It didn’t open. His shoulder hurt.

He walked around the outside of the house, looking for open or openable windows. The ones at the front had modern security grilles on them, which was an anachronism, not to mention extremely annoying. The grass was long and wet so his sneakers quickly became soaked. He hated walking around in wet shoes.

Fortunately, there were French doors in the side wall without any security screens. He took a lock pick from his pocket and fiddled around, however, the lock wouldn’t open. He looked nervously about. There were no cars or people in sight. He swung his torch and smashed a glass panel, reached in and unlocked the door. He cut his hand on the broken glass. He swore profusely and pressed a handkerchief to the wound.

Once inside, he shone the torch around the room. There was a lot of antique furniture, as he’d seen on the tour. Desks and chairs, an old piano, a couch with an elaborately carved back and some armchairs.

His torch swept across a figure standing by the far wall. He yelped and dropped the torch. However, the figure continued to glow softly in the dark. It was a plump woman wearing a bonnet and a long dress with puffy sleeves. She carried a fan, waving it irritably in front of her face.

“It is very hot in here,” she said in an English accent.

Alastair snatched up the torch. His hand shook. “Who are you?” His voice sounded squeaky.

The woman acted as if she hadn’t even heard him. She walked across the room, fluttering her fan. As she passed the desk, Alistair could see its outline dimly through her.

“Get away from me!” he shouted. He stumbled back against the wall, clutching at a cord to keep his balance. A bell rang somewhere in the house. A serious-looking man in a dark suit entered the room from a side door. The only problem was, he didn’t bother opening the door first.

“You rang, Sir?” His voice echoed in the room.

“This isn’t happening,” Alistair said to himself. He must have drunk too much beer earlier. “None of it’s real.”

“Oh, there you are, Gerald,” the woman in the bonnet said. “Please take my hat.” She held it out in a translucent pale hand. The man took her hat and placed it on a stand in the corner.

The woman appeared to notice Alastair for the first time. “Oh, we have a visitor. How do you do?” She started walking slowly towards him.

Alistair screamed and backed away into a corner, clutching at something on a stand beside him. It was a vase of flowers.

“My, what lovely carnations,” the woman said, looking at them with interest. “Did you just pick them?”

“What? Take them.” Alastair thrust the vase at her, however, it passed right through her hands and shattered on the floor.

“Oh, goodness me. I am so clumsy,” the woman said.

Alastair took a deep breath. He glanced at the serious-looking man who was hovering discreetly nearby. “You, Gerald, take this lady outside. Show her the carnations.”

“Very good, Sir.” The man bowed and left the room the same way he had come, passing right through the door. To Alistair’s relief, the woman followed him.

Alastair wanted to get out of there, but he had bills to pay. He shone his torch around the room again, looking for valuables that were easy to carry. He picked up a book from one of the desks. It was Moby Dick, a brand new first edition. He stuffed it in his bag. He checked the desk drawers, but they were all empty.

A shelf above the fireplace held ornamental figurines made of china. Alistair was just examining one when he heard footsteps in the distance. He froze.

There was a creaking sound, as if a door was opening, and a skinny teenage girl appeared, walking straight through the wall. Her hair was tied back and she wore a white apron over a plain blouse and skirt.

“Cook asked me to consult with you about the menu,” she said, looking at Alistair. “For the dinner party tonight.”

“He requested it now.” She edged closer.

Alastair sat down at the nearest desk, which held sheets of paper and a quill pen and ink jar. He dipped the pen and scrawled on the paper. He wasn’t even thinking about what he was writing, yet the words seemed to form under his hand automatically. ‘Roast pig. Vegetables. White sauce. Plum pudding.’ He thrust the paper at the girl and was relieved when she took it and retreated through the wall.

Alastair stuffed the quill pen and ink jar in his bag, but forgot to put the lid on the jar first, so he spilled ink all over Moby Dick. Starting to feel desperate, he grabbed figurines randomly from the shelf and looked for something to wrap them in. All he could find were lace doilies on the table.

The room suddenly flooded with light. Alastair glanced up. The candles in the chandelier above had burst into flame. The front door opened and two couples entered the room. The men wore long coats and top hats. The women wore floor-length dresses with full skirts, and their faces were unnaturally pale. They looked solid, but there was something odd about them. They didn’t cast shadows, and they seemed to float just above the floor rather than walking on it.

“How do you do, Mr Burton? I am so pleased to meet at last,” the youngest man said.  He offered his hand, but Alistair ignored it. “I am Mr Lambert and this is my wife, Mrs Lambert. May I introduce Mr and Mrs Chaney.”

“How do you do? Are we frightfully early?” Mrs Lambert said. “Our coach made very good time.”

“The driver behaved as if he was being chased by a ghost,” Mr Chaney chuckled. He was carrying a walking stick, which he twirled playfully.

“Sit down. Help yourself to drinks,” Alistair said, inching towards the French doors.

The newcomers looked shocked, and muttered amongst themselves.

“We are expected to pour our own drinks!” Mrs Lambert said.

“Preposterous. Does he not have servants?” Mrs Chaney said.

The teenage maid appeared again, seemingly out of nowhere. This time, she carried a silver tray with a teapot and cups. ”Would you like some tea, Sir? Madam?”

She offered cups to all of the guests, then approached Alistair. He backed away, fearful of what might happen if anyone touched him.

She looked embarrassed, and set the tray down on the table.

“Will you play something for us, Mr Burton?” Mrs Lambert said, looking at Alistair curiously.

He wasn’t sure what she meant until he realised that he was now standing next to the piano.

“I don’t know how to.” He surreptitiously picked up a silver candlestick and slipped it into his bag.

“It must be his wife’s piano,” Mr Chaney said. “I am quite keen on the instrument myself. I have been taking lessons.”

“Yes, go ahead,” Alistair said. The trick, he’d realised, was to keep them occupied. He sidled towards the French doors, but the maid went over to draw the curtains, and then stayed there.

“You’re dismissed,” he told her, but she ignored him.

He looked around nervously, wondering where the other doors led, and if he’d be able to open them. Mr Chaney started tinkling away on the piano. Mr and Mrs Lambert started waltzing. Alastair moved away from them only to nearly bump into Mrs Chaney, who was examining the remaining china figurines. He snatched Moby Dick from his bag and dropped it on the shelf. “Would you like to read this, madam?”

“Why thank you. But it appears to be stained with ink.” She looked puzzled.

“Do you not have a man to do that?” Mr Lambert said.

Alistair opened the door, and lamplight flooded in. To his horror, he saw a horse and carriage standing on cobblestones. A man in a thick coat was brushing the horse, whistling to himself. Past him, through a gate, Alastair saw a dirt road and more houses. There was no sign of the park that had surrounded the place earlier.

Alistair slammed the door shut again and leaned against it, shaking. The guests all looked at him curiously. Mr Chaney continued playing a ditty on the piano.

“Stop it! Let me out of here!” Alistair shouted. “You can keep your stupid antiques!”

He threw his shoulder bag onto the floor, then stared at it. It was now made of leather rather than polyester. He looked down at himself. Instead of a T-shirt, jeans and sneakers, he now wore a starched white shirt with suspenders, black trousers, and leather shoes. He had an old-fashioned windup pocket watch instead of his digital watch. Worst of all, he could faintly see the floorboards through his legs and feet. He had become one of THEM. 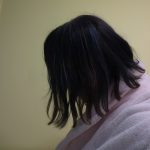 C.A. Broadribb worked in Parramatta until recently and often goes there for shopping, movies etc. Writes both fiction and non-fiction.