There’s the white girl with the black feet
lying at the top of the stairs
whose hair looks like it
hasn’t been brushed in years,
who has nowhere to go but there
and nothing to do but drink
endless cans of Coca Cola,
leaving the cans in a heap
at the end of her bed in the street
because she can’t leave to dispose of them,
who sleeps with her face to the wall
hoping the crowds don’t trip on her
or kick her in their hurry to go Some Place Else.
But there are crowds that go against this tide,
people who see that this is Some Place Else.
Marcus is coming up the steps
in his expensive dark green suit
buttoned over his slim body,
his hair perfect, as they say.
He’s talking nervously to a colleague,
a blonde woman in a red suit and heels,
about his meeting at Deloitte,
hoping for a new, powerful job in the West.
Trailing him onto the streets
is Brad in his hi-vis shirt
carrying a tray of coffees and a bag of toasties
for breakfast for him and some workmates
at the Darcy Street construction site
that bewilders and frustrates the locals.
He drops five bucks in the Black Foot Girl’s bucket
that Marcus didn’t even notice when he tripped on her blanket.
Pat walks down the arcade to the State Revenue
to make the same meaningless tax decisions
he’s been making for nearly thirty years,
and an incognito Hells Angel in a shirt and tie
who keeps to himself strides along Argyle street to his job
as an Assistant Director at the RM
that’s on the outside of the Westfield.

IN A PARRAMATTA CEMETERY

The grass has grown old and wild
in recent times.

The Reverend Samuel Marsden casts a long shadow
over the rest.

A couple of blokes used to come
and mow, but,

“Due to the Outbreak of Covid-19 Maintenance
Has been Delayed

Until Further Notice”, it says, dried grass
piled at the gate

in a heap of black plastic bags. The grass
punctures them.

I don’t high-step through the grass to check on
my first white ancestors,

but I scan the sign for the names and dates
of their birth and death.

The dates are from the beginning of white settlement,
and too close together.

when I close it and move on to be amongst
the living.

The bones of little William puncture my crown like the dried grass
in the plastic. 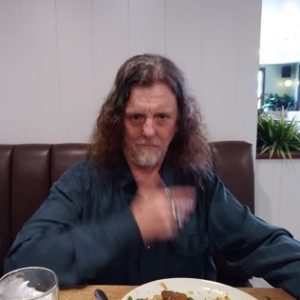 Peter Cartwright  is a Parramatta post-grunge poet who has been published locally and internationally including in ZineWest the last seven years, gaining various special recognition from the editors and the judge. His themes are mental illness, drugs and alcohol, aging, and marginalisation. He has been described as Parramatta’s Poet Laureate.