Harold starts reading from his notepad in his quavering voice. ‘Elsie, darling, your eyes are as blue as cornflowers …’

‘Cornflour’s white, not blue,’ Kathleen says, smoothing down her skirt. ‘I use it to make pudding. He doesn’t cook. All he can do is make a cup of coffee.’

‘Don’t worry about it, dear.’ Florence pats his arm. ‘Let’s just listen to this gentleman’s poem.’

‘Is Elsie the van driver?’ Gwendoline’s tone is as sharp as her clothes, and not in a good way. ‘She drives like a maniac. Shouldn’t be allowed a licence at her age. Or is that Samantha? They all look the same to me.’

The care nurse stands nearby, listening in a polite, detached manner. Harold continues with his reading.

‘I love your golden quiff …’

‘If she’s dyed her hair, I hope she did an allergy test first.’ Charlotte’s unnaturally even dentures show as she grimaces. ‘My nephew dyed his hair purple and went into anaphylactic shock. Horrible, it was. The ambulance only just got there in time.’

‘Ambulance? What ambulance?’ Liam peers short-sightedly out of the window next to him. ‘Who was it this time?’

The care nurse’s professional smile remains fixed to her face.

Harold’s hand shakes and he pauses for a moment before continuing. ‘Your voice is like silver to my ears …’

‘What, hard and cold and gets tarnished all the time?’ Gwendoline says. ‘If Elsie’s the one who runs Bingo on Tuesday nights, that’s about right. She sounds like a foghorn. Can’t stand her.’

‘Foghorn?’ Liam looks puzzled. ‘Haven’t heard one of them in years. Are we near the shipyard?’

‘If her voice is harsh, it could be strep throat,’ Charlotte says. ‘I had that once. I thought I’d just caught a cold, but it turned out to be worse than that, and I had to take antibiotics. I had a fever, too.’

‘It wasn’t Elsie at Bingo. She can’t read,’ Florence says, smiling slightly. ‘Let’s support Harold. He’s being brave reading that out, even if he is struggling and it’s a bit thin.’

Someone across the aisle glares at him. ‘We don’t want to hear about your sordid past.’

‘Did she say ‘sautéed paste’?’ Kathleen says. ‘You don’t sauté paste. You sauté meat and then add your seasonings.’

‘Not here they don’t,’ Gwendoline snaps. ‘Everything tastes like porridge. Like that mush they gave me for dinner last night. It was disgusting.’

‘That was porridge,’ Florence says. ‘You had a stomach ache, remember?’

‘I hope it isn’t appendicitis,’ Charlotte says. ‘That can start as an ache and then it spreads and becomes very serious. You might need an operation.’

The care nurse’s smile is starting to look strained, however, she keeps her attention on Harold.

‘Elsie, darling, my heart skips whenever I think of you …’

‘That could be atherosclerosis,’ Charlotte says. ‘My hubbie had that, and then he had the heart attack. My doc says that heart problems are really common as you age.’

Edward’s head jerks up. ‘I wasn’t sleeping; I was resting my eyes. Is it lunch time yet?’

‘If Elsie’s the one who brings around the magazines, she’s more like ninety,’ Gwendoline says. ‘Judging from all the wrinkles. They’re like train tracks on her face.’

‘Darling, your mind is as sharp as a tack …’ Harold says.

‘He must mean one of the blunt ones they use on the bulletin board,’ Gwendoline says. ‘Always falling off. That’s how they lost the lawn bowls list and we had all those arguments. Had to select teams by tossing coins.’

‘I think you mean ‘glazing’,’ Kathleen says. ‘I like to glaze pork loin with caramelised brown sugar. It makes the top nice and crispy.’

‘You’re an unusual partner, but I love you forever,’ Harold concludes. ‘My darling Elsie.’

‘That’s very nice, Harold,’ she says. ‘How about you sit down now and I’ll get you a cup of tea.’

‘Who is this Elsie?’ Liam says. ‘Isn’t Harold single?’

C.A. Broadribb could describe herself as either ‘fat, lazy and tired’ or ‘intelligent, creative and humorous’. She writes both fiction and non-fiction. 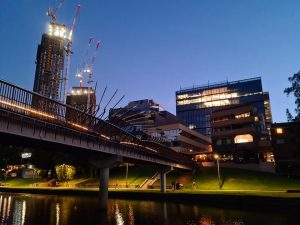