Our prospective lovebirds, Patricia and Liam, are about to meet. Patricia enters the café to drink her usual latte before going to work –

‘Wait a minute. Is he called Liam?’ She glances at the young, ginger-haired man sitting by himself underneath the blackboard. ‘I hate that name.’

Ignoring him, she sits down near the bookcase by the door instead. A waitress trudges over to take her order.

‘No, I’m not. I haven’t even noticed them. Anyway, blue eyes with ginger hair is weird.’

She randomly pulls out a book from the bookcase. It’s titled ‘At Paddle Speed’ and is about someone’s kayaking adventures in the Pacific Ocean. She flicks through the photos in the middle section.

I’m trying to create a romance. Patricia feels lonely and wants someone to share her life with. Perhaps someone to go kayaking with.

It’s one of the most popular names in Ireland. Short for William.

‘Why can’t they use “Will” or “Bill”, like everyone else does? Anyway, if he has a thick Irish accent then I won’t be able to understand him.’

‘Forget it. She’s obviously not interested,’ Liam says in his thick Irish accent.

He gets up and heads for the door.

Liam trips over Patricia’s handbag on the floor and hits his head on the bookcase. He staggers back. He’s suffered a minor concussion, causing him to lose his accent and to decide to call himself Will.

‘Ow! That hurts!’ He rubs his forehead. ‘Why does my voice sound strange?’

‘I never put my handbag on the floor. I don’t want it getting dirty.’ Patricia snatches it up, along with her umbrella, and attempts to dust them off, only to realise that she’s getting germs all over her hands and to start searching for her bottle of hand sanitiser.

Will gazes upon Patricia’s lovely features –

‘She looks ordinary to me,’ he grumbles. ‘Is there a doctor here?’

The waitress hurries over. ‘I did First Aid. If you’ve got a head injury, you should lie down.’

‘There’s not enough space. And the floor’s dirty.’ He slumps into a spare chair at Patricia’s table.

‘You shouldn’t sit there without asking permission. It’s rude.’ She turns away from him.

Give him a chance. He has a better name now. Look how tall and handsome he is. His eyes, which had initially appeared blue in the light, are actually green.

Patricia doesn’t look at his eyes, but the waitress examines them. ‘I should check if your pupils are the same size. Do you have blurred vision? Any memory loss? What’s your name?’

‘Sounds like I should call an ambulance.’ She pulls out her phone.

Will accidently knocks it out of her hand and it falls onto the floor. Its screen goes blank. He apologises for his clumsiness but explains that he feels better and doesn’t need medical help after all.

Patricia ignores both of them and watches the rain pelt against the window, running in rivulets down the glass.

Why is it raining? Romances should have warm, sunny settings.

‘It often rains in summer,’ Patricia says. ‘That’s why I’m carrying an umbrella.’

Will continues to look bewildered by the situation. ‘Am I still Irish or not?’

Will explains that his family had emigrated from Dublin to Sydney when he was very young, before he started school, so therefore he feels Australian even though he acknowledges his Irish roots.

Patricia looks bored. ‘I’d only go out with someone special. What do you do for a living?’

‘You’re not the intellectual type, then. I’m a graphic designer. Have a uni degree.’

‘Think you’re better than me, huh?’

‘I won’t have much in common with someone who unblocks toilets for a living.’

Now, now. Even if this isn’t love at first sight, you two should at least be attracted to each other and interested in getting to know one another. Remember the ‘opposites attract’ theory.

‘Are you sure you’re all right?’ the waitress asks Will. ‘You look a bit out of it.’

The waitress had expected this to be an ordinary day until the tripping incident occurred, but is now intrigued by the chance meeting between the two strangers. She can’t wait to see what happens next.

‘Why do you keep calling me “the waitress”? My name’s Ani. Short for Aniveta.’

She glances suspiciously at Patricia as if wondering if the younger woman is going to criticise her name, too, but Patricia remains silent.

Will feels the urge to do something romantic to enliven the situation. He selects a long-stemmed carnation from a vase on the windowsill and offers it to Ani, I mean Patricia, while gazing adoringly at her.

Patricia sneezes, and waves the flower away. ‘I’m allergic. I wouldn’t have sat here if I’d noticed that vase.’

‘I didn’t mean to take it.’ Will tries to replace the carnation, only to knock the vase over, spilling water everywhere.

‘See, he’s not right for me,’ Patricia says. ‘I’m graceful. Do ballet for a hobby. He stumbles around and knocks things over.’

Will can fall in love with Ani, then. She’s considerate and practical. Surely under that pragmatic exterior, she has a sense of humour. As they go out on dates, they can laugh about the way they met –

Forget it. This romance genre is too hard. Patricia leaves the café and hurries towards the office through the pelting rain, clutching her umbrella, feeling forlorn –

‘I’m not forlorn!’ she says. ‘I’ve got a great job, plenty of friends, lots of hobbies. I’m happy being single.’

C.A. Broadribb could describe herself as either ‘intelligent, creative and humorous’ or ‘fat, lazy and tired’. She writes both fiction and non-fiction. 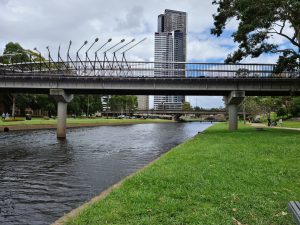