At Customs, she noticed that some travellers in front, ones from a different flight to hers, seemed nervous, waiting their turn in silence. She recognized a few passengers from her plane at the rear of the queue and smiled. Nobody reacted. They were all busy readying their suitcases for the imminent inspections. One could hear only the Customs Officer’s voice asking for passports. He appeared bored, giving a superficial glance at the open suitcases before waving the owners on. From time to time, he chose a person, at random, Elena believed, and inspected the bag’s contents more thoroughly.

Finally, it was her turn to be checked. She hoped she would not have any problems. Still, she was a little nervous because she had brought a few bottles of ‘uic’ [tzuica, a brandy] from home. If he asked about them, she decided she would claim that they were for the children. Of course, she had wrapped them up tightly in her clothes but who knows what these Australians could do? A good Romanian customs inspector, she thought, would have looked even in her socks! Holy Mother of God, she panicked, he may find my bottles and take them away from me. With all her thoughts fixed on the bottles, the officer’s question took her by surprise.

‘No, Romayna! România. You should pronounce it România,’ she replied in Romanian, correcting his pronunciation. Bloody hell, she thought, these people can’t even pronounce the name of my country correctly.

Elena was getting worried. Why does he keep saying ‘ hmm’? she wondered. Then she heard him say, ‘Open your luggage, please!’

And although she did not understand the words, she presumed he was asking her to open her suitcase. She nodded, pulling the zipper open. The officer inspected her belongings, piece by piece and when he got to the bottles of brandy, he gave them a passing glance. They were of no interest to him. Elena sighed in relief. It all appeared to be going well. The officer seemed to have finished his inspection.

Satisfied, he was just about to tell the woman to leave, when, brushing his hand automatically over the clothes, he felt something prickly. Surprised, he started to set aside the items of clothing to get to the curious object. When it revealed itself, what he saw was a miniature broom, about 30 cm long. He took it out of the case, alternately inspecting it, and then Elena, eying her piercingly, his demeanour demanding an explanation.

The poor old lady’s heart sank. A feeling of foreboding overcame her. This is not good. What are they going to do to me? Maybe this little broom, as old as she was, its edges blunted and frayed could be the cause of detention at least or deportation at worst. Her thoughts were broken by the sound of the officer’s voice.

‘What the hell is this?’

Elena was confused. He repeated the question.

‘What’s this?’ he barked, holding the broom aloft in the air and pointing to it. From his tone, his grimace, and the brandishing of the object, she understood what he wanted. His whole behaviour was explicit enough, even for her. The Customs’ Officer asked for an explanation. And … she knew the answer. Elena now felt on familiar ground. Her fears were fading, and imbued with confidence, she started to tell him loudly that she used the little broom for cleaning the tablecloth after a meal. To sweep off the breadcrumbs. She said all this, in Romanian, of course, a language she presumed was universally understood. The officer looked at her quizzically. He did not understand the woman’s words or gestures. Her pantomime failed to bring about a translation.

‘Crumbs off the table,’ she repeated a little more loudly. Perhaps he did not hear me, Elena thought.

But she could see that the officer was getting more and more agitated, so she continued: ‘I brought the sweeper with me. That’s okay, isn’t it? People here eat as well. They need something like this to clean the table,’ she said, her voice getting higher and louder. Perhaps, he’s indeed a bit deaf, the poor man, she thought. So, Elena continued explaining as loudly as she could. But if she thought the man would understand her that way, she was deeply wrong. His confusion was turning into anger. He cut her short.

‘Madam, if you want to introduce this object into Australia, you have to do it legally,’ he said in an icy voice. And the coldness of it frightened Elena.

‘You have to pay, $100 for this bloody broom’s fumigation,’ he snapped.

‘Money?’ She repeated the word. ‘Money?’

Whilst Elena spoke no English, at least she did know the meanings of the words ‘money’ and ‘dollars’.  But the meaning of ‘fumigation’? No. She had no idea what could that be. But even without fully understanding, she did begin to intuit the situation. No doubt these people are asking me to pay for the broom and that bloody fumigation, or fumigeshan, whatever that is.

Regardless of any other outcome, she understood that she would not be able to leave the airport without forking out money for the damned object. She welled up with anger at the perceived injustice of the situation. A tattered broom, and they wanted money for it. No! I’ll be damned! No money! So…

The passengers around her were observing the bilingual conversation. Some were amused. Others were sympathetic to her plight. The youngsters, not understanding anything, were thinking: What the heck? Why is he making such a big drama for a bloody small broom? And the poor old lady? Oh… she was getting more and more incensed. Get stuffed, she thought. I don’t need that sweeper! I am not so stupid as to pay you money for it!

‘No money,’ she repeated. ‘Keep it!’ she said curtly as she viciously pushed the broom away from her and towards the officer.

From her outraged voice and the frown on her face, the officer realised clearly that the old woman did not wish to pay for fumigation. And that she no longer wanted the broom. So, he picked up the object with two fingers, and showing no emotion, threw it into a container next to him.

The poor little broom! It travelled halfway across the world, for 26 hours, and ended its life in a rubbish bin! The show was over. Basta!

Upset, Elena struggled to lift her suitcase off the counter. The officer watched her for a split second and with a magnanimity which no one thought possible to exist within him, took the woman’s suitcase in one hand and, effortlessly, placed it on the trolley.

‘Here you are,’ he said kindly, after which he returned to the counter and resumed his rigid posture. The last thing Elena heard as she stepped out to freedom was the officer’s voice. ‘NEXT! NEXT!’

Smaranda Kafka was born and educated in Romania, postgrad France and Australia. Her short stories have been published in Australia, Romania, Canada and America. She has also written three books. Two in Romanian: a  two volume book “ABC-ul unei vieti (the ABC of one’s life), a book of short stories: “Alb si Negru, la voia destinului” (White and Black at the destiny’s will”) and one written in English: “Layers upon layers”. All three were published by Coresi Publishing House, Bucharest, Romania. 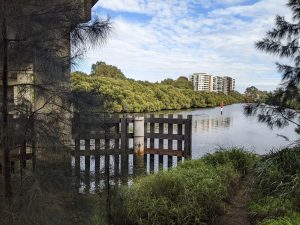